Along with points, timeseries, trajectories, and structured grids, Datashader can rasterize large triangular meshes, such as those often used to simulate data on an irregular grid: 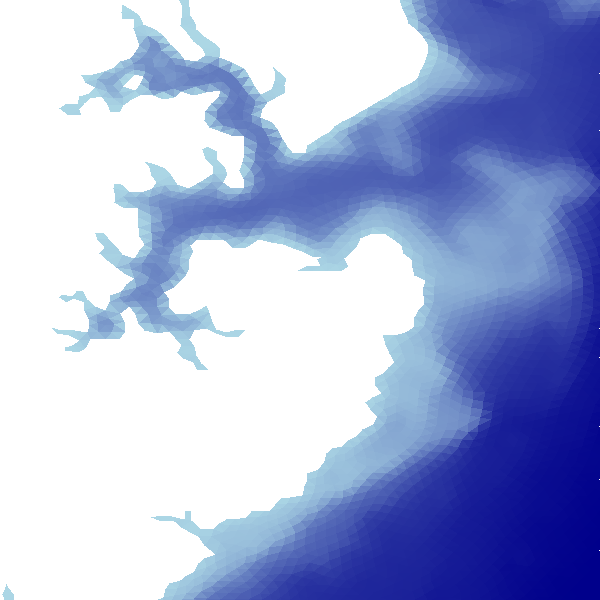 Any polygon can be represented as a set of triangles, and any shape can be approximated by a polygon, so the triangular-mesh support has many potential uses.

In each case, the triangular mesh represents (part of) a surface, not a volume, and so the result fits directly into a 2D plane rather than requiring 3D rendering. This process of rasterizing a triangular mesh means generating values along specified regularly spaced intervals in the plane. These examples from the Direct3D docs show how this process works, for a variety of edge cases:

This diagram uses “pixels” and colors (grayscale), but for datashader the generated raster is more precisely interpreted as a 2D array with bins, not pixels, because the values involved are numeric rather than colors. (With datashader, colors are assigned only in the later “shading” stage, not during rasterization itself.) As shown in the diagram, a pixel (bin) is treated as belonging to a given triangle if its center falls either inside that triangle or along its top or left edge.

The specific algorithm used to do so is based on the approach of Pineda (1998), which has the following features:

and a few assumptions:

Trimesh rasterization is not yet GPU-accelerated, but it’s fast because of Numba compiling Python into SIMD machine code instructions.

To start with, let’s generate a tiny set of 10 vertices at random locations:

Here we have a set of random x,y locations and associated z values. We can see the numeric values with “head” and plot them (with color for z) using datashader’s usual points plotting:

To make a trimesh, we need to connect these points together into a non-overlapping set of triangles. One well-established way of doing so is Delaunay triangulation:

The result of triangulation is a set of triangles, each composed of three indexes into the vertices array. The triangle data can then be visualized by datashader’s trimesh() method:

By default, datashader will rasterize your trimesh using z values linearly interpolated between the z values that are specified at the vertices. The shading will then show these z values as colors, as above. You can enable or disable interpolation as you wish:

The small example above should demonstrate how triangle-mesh rasterization works, but in practice datashader is intended for much larger datasets. Let’s consider a sine-based function f whose frequency varies with radius:

We can easily visualize this function by sampling it on a raster with a regular grid:

However, you can see pronounced aliasing towards the center of this function, as the frequency starts to exceed the sampling density of the raster. Instead of sampling at regularly spaced locations like this, let’s try evaluating the function at random locations whose density varies towards the center:

We can now plot the x,y points and optionally color them with the z value (the value of the function f(x,y)):

And let’s pre-compute the combined mesh data structure for these vertices and triangles, which for very large meshes (much larger than this one!) would save plotting time later:

This mesh can be used for all future plots as long as we don’t change the number or ordering of vertices or triangles, which saves time for much larger grids.

We can now plot the trimesh to get an approximation of the function with noisy sampling locally to disrupt the interference patterns observed in the regular-grid version above and preserve fidelity where it is needed. (Usually one wouldn’t do this just for the purposes of plotting a function, since the eventual display on a screen is a raster image no matter what, but having a variable grid is crucial if running a simulation where fine detail is needed only in certain regions.)

The fine detail in the heavily sampled regions is visible when zooming in closer (without resampling the function):